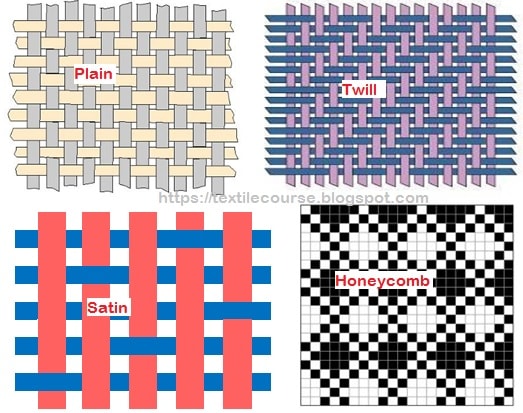 What is woven fabric structure design?

Woven fabric is any textile formed by weaving. Woven fabrics are often created on a loom, and made of many threads woven on a warp and a weft. Technically, a woven fabric is any fabric made by interlacing two or more threads at right angles to one another.

Woven fabric is produced by interlacing two sets of yarns, the warp and the weft, which are at the right angle to each other in the plane of the fabric. … Individual warp and weft yarns are called as Ends and Picks respectively. Interlacing of the ends and picks with each other produces a coherent structure.

There are two types of woven fabric structure are found.

The simplest of all weaves is the plain weave. Each filling yarn passes alternately over and under one warp yarn. Each warp yarn passes alternately over and under each filling yarn. Some examples of plain-weave fabric are crepe, taffeta, organdy, and muslin. The plain weave may also have variations, which include the following:

Weft rib weave: Weft rib may be described as plain weave in which two or more ends weave together as one. It is difficult to achieve very high weft cover factors in weft faced plain-weave cloths. By using two finer ends weaving as one, it becomes possible to achieve higher weft cover factor. Such cloths are expensive to weave and not very common.

Matt:  In matt weaves two or more ends and two or more picks weave as one. The simplest and commonest of these weave is 2/2 matt. (Refer to Annex 2 for weave diagrams)

A weave that repeats on 3 or more ends and picks & produces diagonal lines on the face of the fabric. A twill weave is characterized by diagonal rib (twill lines) on the face of the fabric. These twill lines are produced by letting all warp ends interlace in the same way but displacing the interlacing points of each end by one pick relative to that of the previous end. In twill weave line moves sinistrally (Right – Left, Z twill) and dextrally (Left – Right, S twill). Common derivatives of twill weave are as follows:

Zigzag weave:   If the direction of the diagonal in a twill fabric is reversed periodically across the width, a zigzag effect is produced. Zigzag weave is achieved by simply combining two S and Z twill weaves of equal repeat.

Herringbone weave:  In Herringbone weave also the twill direction is reversed periodically like zigzag weave but at the point of reversal the order of interlacement is also reversed and then twill line commence as usual.

The satin weave is characterized by floating yarns used to produce a high lustre on one side of a fabric. Warp yarns of low twist float or pass over four or more filling yarns. The low twist and the floating of the warp yarns, together with the fiber content, give a high degree of light reflection. Weights of satin fabrics range from chiffon satin to heavy duchesse satin. The sateen weave is similar to a satin construction except that in the sateen weave, the filling yarns float and are visible on the surface of fabric. Examples: cotton sateen, and damask.

Honeycomb:  Surface of produced fabric is rough.Similar appearance or effect formed in both sides of the fabric. In repeat size, ends and picks are.Equal or unequal.Repeat size is multiple of two.Smallest repeat size is 6 X 4.One cell in each repeat.V – draft or pointed draft is found.Simple construction.

Mock leno weave: Mock lenos, also known as imitation lenos are a variety of weaves of ordinary construction which produce effects that are similar in appearance to the gauze or leno styles obtained with the aid of doup mounting. These weaves are generally produced in combination with plain, twill, satin or other simple weaves or even with brocade figuring, to produce striped fabrics, which bear a very close resemblance to true leno fabrics.

Huckaback design: The huckaback weaves are basically toweling fabrics. They are generally associated with honey comb fabrics and hence known as honeycomb effects. They are constructed by alternately combining a floating with a plain weave. Interestingly, a number of weaves are derived from these weaves. Huck a back weaves are suitable for producing thick and heavy textures. One of the well known heavier varieties of this class is the “Grecians”. The design of huckaback weaves permits stripe and check effects to be brought out in the fabrics.

Dyestuffs and their applications