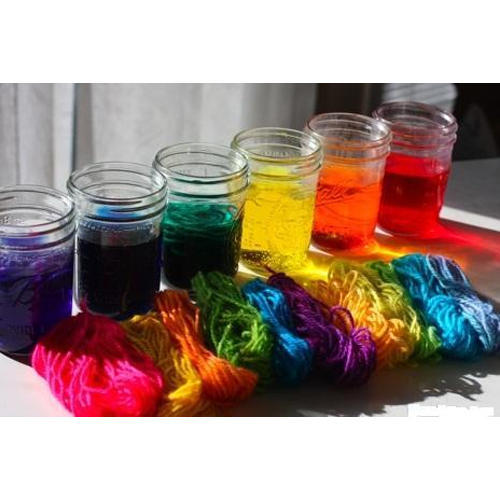 Color is something which make an object more appealing, attractive and gives the pleasure of observation. Color is defined as visual stimulation arising from the stimulation of the retina of eye.

The importance of color in textile products cannot be overemphasized. Color speaks louder than words. The textile industry is well aware of consumers desire for color. The industry is also aware of the fact that the same consumer who selected an item because of its color will be extremely dissatisfied if that item does not maintain of color appearance for the desired or anticipated life of the product.

Dyestuffs and dyeing are as old as the textile industry itself pre-date the written record of man’s historical background.

Dyes may be classified in several ways,that is according to hue produced,according to chemical class and according to the method of application and types of fibers to which they are success

Direct dyes can be applied directly to the fabrics from an aqueous solution.Direct dyes are soluble in water and are applied to primarily to cellulosic fibers and occasionally to protein and polyamides.

Direct dyes exhibit relatively good colour fastness to sunlight and some are considered to have excellent light fastness.

Acid dyes are primarily organic acids that are usually available to the dyer in the form of salts.They are usually applied to the fiber from solutions containing sulfuric,formic or Acetic acids.Acid dyes have no affinity for cellulosic fibers,they cannot be used safely on fibers that are sensitive to weak acid solutions.

These dyes exhibit varying degrees of colorfastness. Some are fugitive to light while others have excellent light fastness, some withstand laundering well while others do not.

Cationic dyes are used for coloring acrylic fibers with excellent success. There appears to be a chemical attraction between the dye molecule and acrylic- fiber molecule.This produces relatively colorfast products.

Basic dyes were used on cellulosic and protein fibers but due to the fact they produce fugitive colors on these fibers,their use has been decreased.Basci dyes may be used occasionally as’topping’ colors to increase the brilliance or brightness of a fabric.

Disperse dyes,formerly called acetate dyes,were originally developed for use on acetate fibers.The dye is only slightly soluble in water but is easily dispersed throughout a solution.

The dyestuffs frequently publicized as the type with the best colorfastness properties are the vat dyes.these dyes exhibit some variation in colorfastness due to differences in chemical structure.

Sulfur dyes- sulfur dyes are used primarily on cellulosic fiber.thet produce fair to good colorfast dark shades such as browns,blacks and naives.Unless they are properly applied they may eventually breakdown causing tendering and weakening of the fabric.

Department of Clothing And Textile.(Batch 35)